The porcnegre or Mallorcan black pig 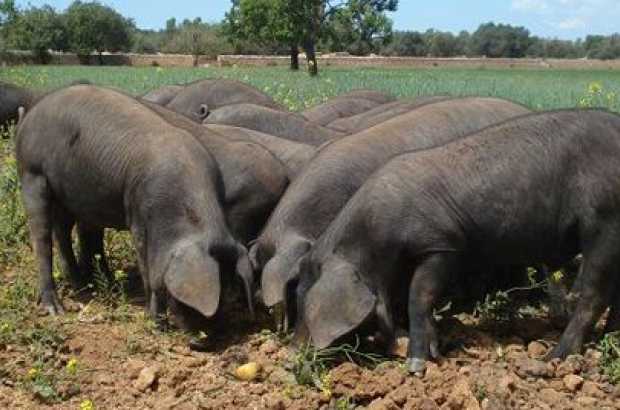 As detailed on the official website of the Ministry of Agriculture of the Government of the Balearic Islands, the porcnegre or Mallorcan black pig is one of the domestic animals that was first established on our islands and which has remained in productive use until the present day, due to the special impact it has had on the family economy of the rural population for many centuries. It is a well-defined breed with characteristics that distinguish it very clearly from breeds from other regions.

The breed has a Stud Book, published in the Official Gazette of the Balearic Islands on 24 June 1999. As is the case with such ancient breeds, there are various theories about the origin of the black pig; the most widespread assumes that this breed is the result of the progressive crossing of the Celtic stock with the Iberian stock, although there are more and more authors who believe that these two stocks acted on another of Asian origin, which arrived on our islands with the first settlers. The black pig is reared and kept in a classic extensive format, nowadays more semi-extensive, by means of the direct use of many plants, little consumed by the other species. The resurgence of this breed, which began in the early 1980s as a result of the commercial pull attributable to the placing on the market of very high quality products, has now been consolidated.

The establishment of the Specific Designation of Origin 'Sobrasada de Mallorca de cerdo negro' has made it possible, through its Regulatory Council, to implement the appropriate rules and commercial channels for the production and distribution of traditional products, which have now consolidated their presence on the market, thus encouraging the establishment and improvement of the breed. Although porc negre mallorquí has proportionally more fat than industrial pork, it is healthier, with up to 60 % more healthy fats, and the meat is more tender, tastier and loses less water when cooked, according to the official study. Consumer consultations reveal that consumers value the method of rearing black pigs and the unique products made from their meat. Analysts recommend ensuring the genetic preservation of the breed and the maintenance of the way it is reared, by increasing the prices of its products and intensifying their promotion and direct sale at farm level.